Communities Unlimited received a grant from Cargill’s Black Farmer’s Initiative to purchase trailers for growers in three states to increase their farm’s capacity.

Cargill’s goal is to build a more equitable economy. They plan to accomplish this by putting producers at the center of solutions, working to increase the participation, profitability, and productivity of Black farmers, ranchers and growers. Cargill worked with several groups across the United States that formed a partnership to increase access to markets, capital, information and technology for Black farmers.

According to www.cargill.com, in the United States, Black Farmers make up less than 2% of the country’s 3.4 million farmers, and there has been a 90% decrease in Black farm ownership. In response, and in keeping with Cargill’s long-standing commitment to farmers in the US and worldwide, Cargill launched the Black Farmer Equity Initiative. The focus is on collaborating with producers to make equity across the food and agriculture system a reality.

Healthy Foods Coordinator, Brenda Williams worked with several small-scale farmers to provide them with trailers, thanks to Cargill’s Black Farmers Initiative. The trailers were purchased from Ouachita Trailer Sales, LLC in Crossett, Arkansas. Some farmers have been farming for over 10 years and still did not have the equipment to do their job effectively. Most farmers used inadequate equipment to transport their products from their farms to market. The trailers the farmers received changed that.

Burthel Thomas, a watermelon farmer from Wabbaskea, Arkansas, is one of the recipients who received a trailer. Before receiving his new trailer, Mr. Thomas had to ensure that he covered all his products before hauling them to a new location. He struggled to haul enough products from the farm to the market, using his trailer.

Before working with Brenda on the initiative, Mr. Thomas had to set aside extra time to prepare his watermelons for the journey to Crossett, AR. In most cases, he arrived at his destination with damage to at least half his load. Thomas explained that weather has always been a big issue, so now that he has a trailer with a roof, he can transport more safely and twice as many watermelons as before.

Watermelons have not always been a part of his life. Still, after retiring from the United States Department of Agriculture (USDA), National Resource Conservation Service, he wanted something to do with his time, as well as something he could leave to his family. “The planets lined up with the solar system, and I stumbled into watermelons,” Mr. Thomas said, laughing. He started with 5 acres of watermelons and currently has 300 acres.

During his career, he gained the conservation skills that assisted him in making his watermelon operation environmentally friendly. Mr. Thomas said that he has a rhythm to his method, which includes lying down the plastic mulch in the spring to get a proper soil consistency, lying down plastic in the winter so that the moisture stays until summer, and finally buying seeds that will plant through the plastic. Mr. Thomas said, “Every sustainable practice I could put on my farm, I have signed up for it.”

Mr. Thomas explained, “I’m a one-man operation; I have to make sure that it is done right and there is a perfection to raising melon.” In addition to the watermelons, Mr. Thomas added 30 beehives to increase the pollination of the watermelons. With the unpredictable weather, he wanted to ensure that the watermelons had enough fruit, were healthy, and stayed in good shape; he then used the honey from the bees to pass around to his friends and family. “I have little jars, and I pass it out,” he said.

Mr. Thomas is happy to have received the new trailer. It has pushed him further into the next step of his business. It has made effective use of his time, and he can transport his product to its destination more safely.

Liz Bell-Simpson is the Director of WSBZ Farms in Little Rock, AR. The farm focuses on making the maximum positive effort for their community. Its mission is to outreach to socially disadvantaged farmers, ranchers, veterans, and children in the community. The nonprofit organization teaches children to learn conservation, and environmental health while studying in their own garden bed(s).

They raise a variety of produce, including eggplant, cucumbers, squash, okra, cabbage, and potatoes and work with local food pantries and libraries to provide healthy products.

Just like Burthel Thomas, Liz and her crew were hauling these products to rural communities outside of the Little Rock area, on a trailer that did not have a cover.

Some of the products were arriving at the destinations damaged and not in the best condition.

Liz started talking to her crew about needing a new trailer, right around the time that Brenda Williams contacted her about the Cargill Black Farmer’s initiative. Liz thought this was perfect timing.

The trailer has assisted WSBZ Farms, to expand and get visibility to the community and expand to other states, including Texas. She has recently collaborated with a rice producer and added rice to her list of healthy foods.

Back To Annual Report 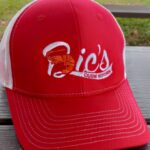